skip to main | skip to sidebar

What shall we do then?

From the recent incidents regarding attacks on several Malaysian churches, many of us who are followers of Christ have one question in mind: What should I do or say?

People are expecting us to have a response: naturally, a defense or even (gasp) a retaliatory one.
Some of us, though taught to forgive as we have been forgiven, will harbour, as minimal as it may be, some outrage and feelings of being violated.

Prominent Malaysian Christian voices rose to defend our rights, and condemn those who seem to challenge our 'rights'.
My first response, from a highly uninformed point of view was: "What is all this talk about our rights? I thought we surrendered our rights to God a long time ago. Somebody teach me."

As I started to read and understand about the whole deal in the usage of the word "Allah", no doubt, there are some pretty good claims to it, as we as those against it. But it still troubled me that we are so instinctively defensive, while Jesus would always come up with a totally unexpected response in times when he was accused and discredited. Going back to the gospels, its clear that what God expects of us is not what the natural man would do, but he expects so much more - turning the other cheek, carry another weight for another mile, giving up your rights!

In our house church last Saturday, one of us noted: many times we Christians have tried to be smart and give educated responses in terms of how incidents like this will affect our economy, sociology, human rights, language, etc. But maybe God wills us to be blatantly Christian; that is, to forgive unhesitatingly, turning our cheek the other way, and be peaceable with our neighbours. (I will not say enemies, for our Muslim brothers and sisters mean more to us than the Roman oppressors of the Jews two thousand years ago.)

It is heartbreaking to see the incidents unfold on television, not because of the damaged caused to buildings made of stone, but that God's children are involved in such a strife over a word (I'm not disregarding its significance, but it is, just a word). And also that (some of) God's children would give responses so far away from the mark Jesus has set. "We should be worried about our safety." "Our church building is in danger." "This is Malaysia." "I might consider migrating." "I'm insulted."

God's heart is breaking, we know it. And we cannot put further weight on the tense situation, but neither we should take it lightly as not to extend forgiveness. And as one sister noted, let's not forgive because we are in the right, and not to earn Brownies points, but it is God's redemptive character to forgive and for us to move on for the glory of His Kingdom.

Isn't God awesome? Be blessed even as you read this.
Posted by Antioch Network Community at 11:55 PM 1 comment:


This was the 8th year since the Kota Damansara Community Christmas Carnival commenced, and it was better than ever before. We are just so grateful that our KD friends from Banner of Love, FGA KD, River of Christ count us as worthy partners in this amazing event.

Here are some pictures: 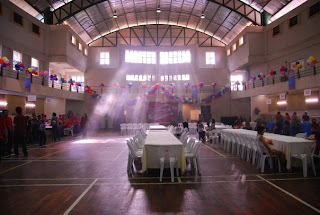 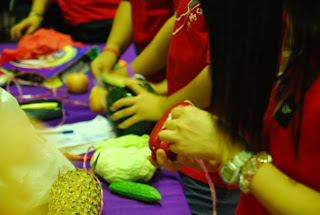 Setting up the vege 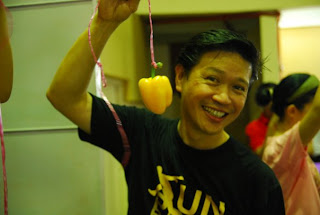 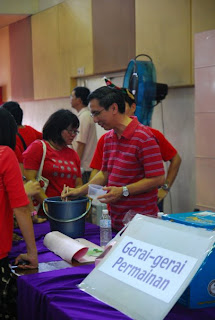 Uncle Chris trying a hand at the marbles 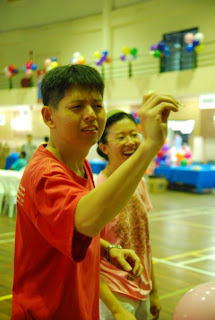 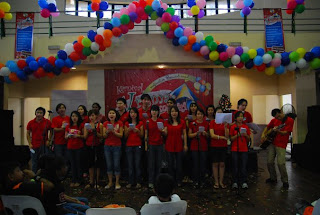 A song for all! 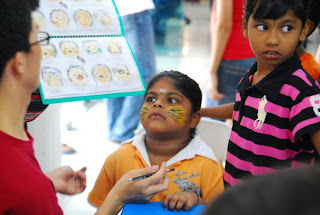 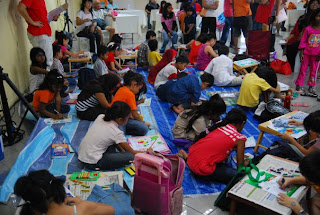 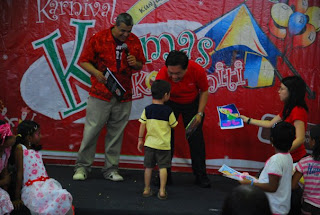 Winners of the coloring contest 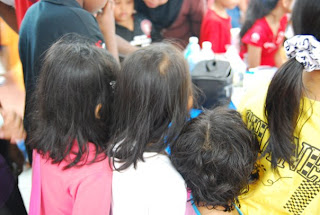 Kids anxious to have their faces painted 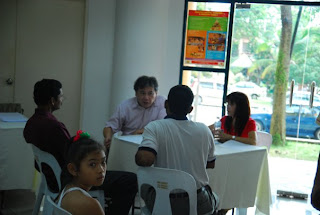 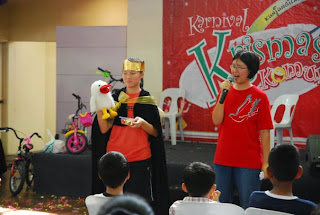 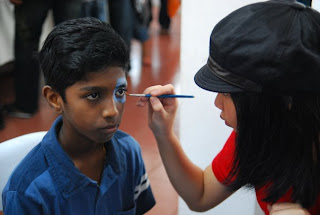 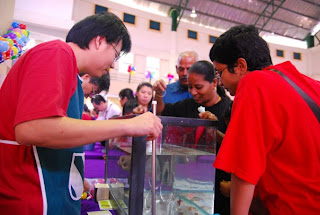 Adults love the games as much as the kids!
Another amazing Christmas spent! Keep up the good work guys, and don't stop being a blessing!
We will have a thanksgiving tonight ( 6th January, 2010) at 8pm, at Banner of Love. :)
Posted by Antioch Network Community at 8:08 PM No comments:

The blog is back.

Apologies for the inconsistency of this blog - truth is, there is so much work and workers are few! Which is great, because God has truly been working through us in the year 2009.

It hasn't been an easy year. Antioch was like a young apprentice, scrambling after the master learning the craft. Many times we encounter frustration in the results, and each of us is sharpening each other as iron and iron (ouch!), but that if that is what it takes to bring unity and purpose to the church, that's what we willingly submit to. And the craft is, loving people.

This year, we are going to turn love into action. Elder Hok Seng says, "Jalan!" (that means 'Go!')
Awesome folks have come into our midst to teach us. It would take an entire page for us to acknowledge all of them.

On the 2nd Jan we worshipped together with this song:

We will go from strength to strength.
Until we see You face to face

Hear our prayer, O Lord God Almighty,
Come bless our land,
As we seek You, worship You.
How blessed are we to know God? It's beyond us. With Jesus, we have so so much going for us.
A person who is blessed beyond reason shall be a blessing to others. I pray that Antioch comes into full bloom with that this 2010.

See you guys next Saturday!
Posted by Antioch Network Community at 7:48 PM No comments: 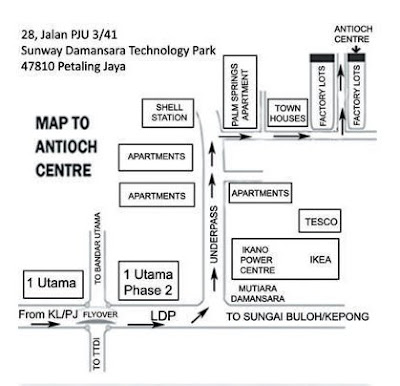 Posted by Antioch Network Community at 1:25 AM No comments: 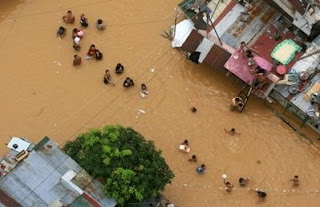 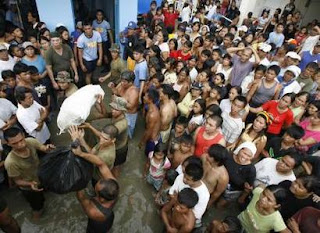 Hi guys, I'm sure you are all aware of the Tropical Storm Ketsana, which hit the northern Philippines on Saturday and caused the country's worst flooding in four decades. Death toll had risen to 246 today with 2 million people displaced.

Antioch Network Community has been in partnership with Care Channels International for the past years we are supporting them to aid the disaster relief work there.

On top of existential funds from the church, we will be passing a second bag at Antioch Mosaic this Sat and House Church on Sunday for you to participate in this giving. Those who are writing cheques, please make them payable to Bandar Utama Chapel & ear-mark it for Philippines flood relief.

Thank you for your generous donations.

On another note, the Care Channels Livelihood calenders for year 2010 are up for sale! Drop us a note if you want one for your family and friends - these calendars are a vital for the livelihood of the poor in Filipino and Indonesian slums.


Dolly
Posted by Antioch Network Community at 2:54 AM 1 comment:

Announcements
View more presentations from antiochinfo.
Posted by Antioch Network Community at 2:35 AM No comments: 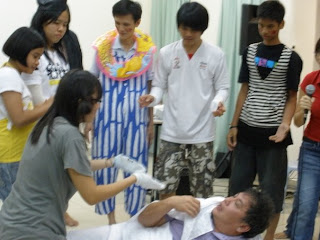 A Typical Healing Ritual at Antioch

Woooh, talk about a packed past few weeks. First the 6 hour worship session, where people ultimately got soaked to the bone, metaphorically speaking of course.

Now we’ve got our camp, with the theme of being a Healing Community. Woah, enough said, I could have easily gone there with expectations to be healed from all this lethargy.

But my, was the healing/recovery I expected was way different from what I expected. I received healing through a different way than I would have expected, but being taught about something I would in return gain the awareness about what I was doing wrong, and hence that was what causes me to think that I’m always worn out, and tired out…

There was one main point that I received from the sessions that we had, that ultimately spoke to me, and perhaps I believe spoke to many others.

Let my heart be broken for what breaks yours.

What does it take for us to sometimes feel the pain of a broken heart? I personally have, and although I strive to forget that pain, I won’t lie to you and say, “Nah, it doesn’t hurt…it’s just like a twinge in your chest.” It hurts A LOT, to say the least. Hehe, but still to think that there’s someone out there who’s heart is experiencing immense pain because of something I did, or something I DIDN’T do. Sometimes we may not be at the liberty of helping God’s heart heal, but we can try and share in His pain, and see what we can do to help the situation.

For example : The poor/needy in this country - does it hurt you, if you see your beloved family members, suddenly put out of their homes due to a bad snare in this economic crisis, and having to beg on the streets. PRECISELY…there ARE people on the streets, whom have people who love them, but perhaps do not have the power/resources to help them as much, which is why they need our help.

It’s easy to talk, for sure. I know that, for I myself sometimes feel and confess that I lack a people’s heart. I wish I had one, but I don’t. I want to nurture one, and with God’s help, I believe one day, my heart WILL be broken for what breaks His heart.

Prophetic evangelism for me, experiencing something like this, or participating in this was something I was not accustomed to. But by letting go of ourselves/myself, I found that by just meditating, you will feel the spirit of the Lord just entering your soul, and whatever the outcome of that, don’t cage it, let it out, be it in dancing, singing, shouting, praying, crying. And through that the encounter with God will just change you, as it did me.

Have you seen the facebook photos? What? You don't have facebook? Go get one and join us there!

Posted by Antioch Network Community at 5:35 AM No comments:

Antioch Network Community
Petaling Jaya, Selangor, Malaysia
Gosh, what are we? One of the greatest things we've learned is church is people. We use buildings and organization, but the people of Antioch are just as fragmented and broken as the rest of the world, but because of the work of the cross and the resurrection of our Lord Jesus Christ, we have turned from victims and prepatrators to victors and healers. We fail a lot, but we make it with the unceasing grace of God.

We gather every Saturday evening to celebrate Jesus and to inspire @ Antioch Mosaic, 5.00pm - 6.30pm. We work towards the demolition of walls of a traditional church service so EVERYONE can participate and dialogue just about anything.

We also meet as House Churches; currently we meet in 3 HCs, Bethel, Bethesda, and Beit Parach. Typically we meet Sunday mornings in various homes, unless decided otherwise, to be flexible and to allow time for recreational activities. (Yay!)